An Miniatures posted by Chris Thursten on September 25, 2017

We’ve both been under some pretty strict time constraints in September, limiting both our hobby time and our playing and recording time. As a result, this episode is a little shorter than usual (two hours rather than three.) Don’t fret, though! We’re thinking about bonus Miniatures Monthly stuff we might like to produce in October, so don’t be surprised if you’re hearing from us again sooner rather than later.

This is that good lamp we mention during the questions section, by the way. 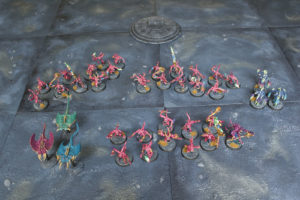 The product of Chris’ intense 48 hour painting marathon: the Screamers, Horrors and Herald at the front built and painted from scratch, the Horrors and Flamers at the back rebased. 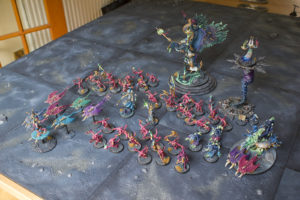 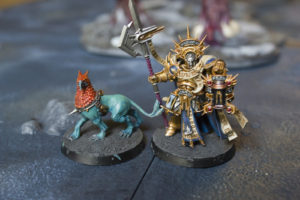 Tom’s new Lord-Castellant, forged from the redeemed soul of Chris’ Chaos Sorcerer Lord. He is still a walking buff. 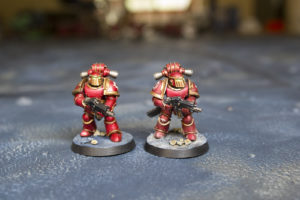 One of Chris’ newly-weathered Thousand Sons, with an unweathered one for comparison. 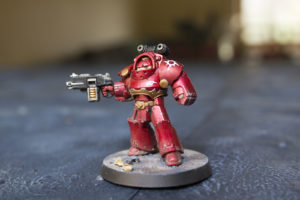 A Thousand Sons Terminator who has recently been through the (dusty) wars. 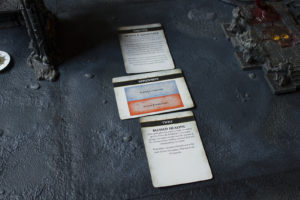 We used Open War cards to set up our latest game. Here’s what that looks like: an objective, a deployment map, and a twist. 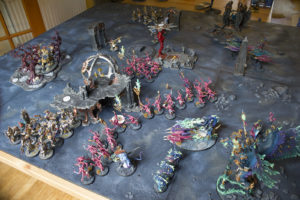 Aggressive Stormcast deployment by Tom leads to the construction of a fortress of Horrors by Chris, who somewhat knows what he’s doing now. Ish. 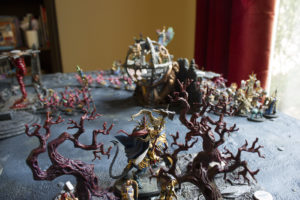 Tom’s general, Tantrus, overlooks the battlefield. This was an interstitial fight in our ongoing campaign: another bloody scrap as the Stormcast push deeper into Tzeentch’s warped domain. 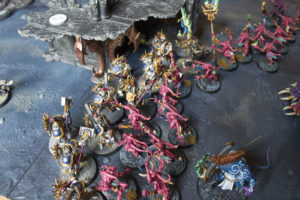 The Stormcast move first. Tom’s Retributors smash an entire unit of Pink Horrors to ash. Meanwhile, the Lord-Relictor chips a wound off his nemesis, the Ogroid Thaumaturge, with a bolt of lightning. 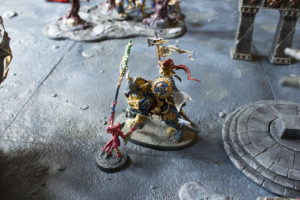 Tantrus charges the most aggressive unit of Pink Horrors by himself and misses with all of his attacks. His Dracoth mount goes on to kill nine of them – but nine is Tzeentch’s number for a reason. 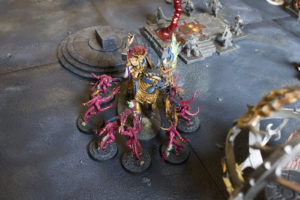 A quirk of fate sees six Pink Horrors return to encircle Tantrus and tie him down in the middle of the field, where he’ll spend the rest of the battle (until he dies.) 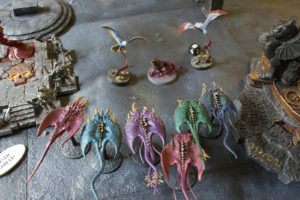 Tom’s Aetherwings (with a Gryph-Hound standing in for a bird accidentally left at home) try to screen Chris’ flock of Screamers. This fight didn’t last long – soon the Screamers are enjoying a tasty celestial chicken dinner. 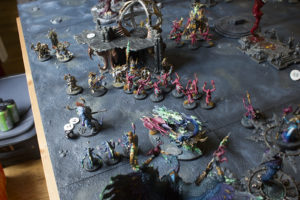 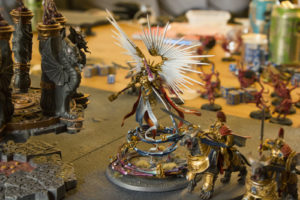 At the beginning of the second Stormcast turn, Tom’s Fulminators and Celestant-Prime arrive on Chris’ exposed right flank. Unfortunately, daemons can’t be redeemed by Ghal-Maraz: only smashed to pieces. 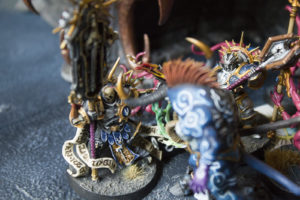 Old foes face off as the Relictor and Thaumaturge meet in one-on-one combat. The Thaumaturge kills the Lord-Castellant’s Gryph-Hound, but it’s Flamer fire that eventually downs the Relictor. 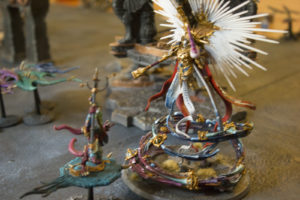 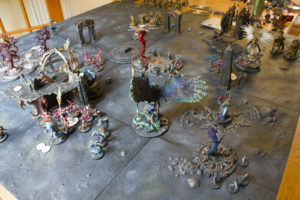 The forces of Tzeentch reclaim their right flank and assault the Liberators on Tom’s back line with long-range magic. The Lord of Change marches forward to contest the Celestant-Prime, screened by the Screamers. 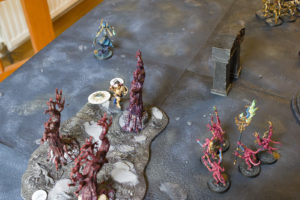 Chris attempts a single-turn capture of Tom’s back objective, but shooting from the Burning Chariot triggers bonus mortal wounds on the final Liberator, killing him and preventing the Changeling and Horrors from charging into range of the objective. We called the game at this point due to time constraints, but this was an important moment as it meant that Tom retained a points lead in what was otherwise a very close battle.

Thanks for listening, everybody! Miniatures Monthly will return on Tuesday 31st of October.