An Miniatures posted by Chris Thursten on January 1, 2018

Chris and Tom discuss the changing art of GW miniatures design, hopes for the next year of Age of Sigmar, and report back from both Skirmish and 40K.

We apologise for the terrifying sound of a phantom horse that occurs in the background around 1:52:45. We don’t know where it came from, or where it went. Happy New Year. 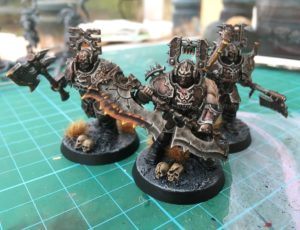 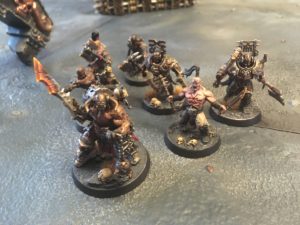 Chris’ Skirmish warband going into game two of our campaign. 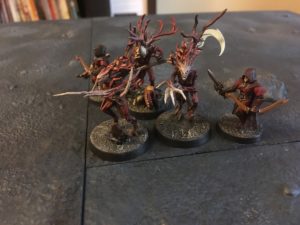 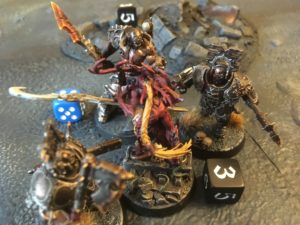 The forces of Khorne lay into the Branchwych for round after round of combat. But then: BEES. 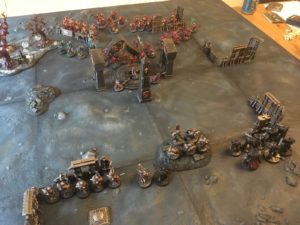 Starting positions at the start of our game of Warhammer 40,000. Tom’s Space Marines take up defensive positions behind Chris’ speed-painted Ryza-pattern ruins, while Daemons lead the charge up the middle. In the ruin, a lone unit of Sisters of Silence hold the line. 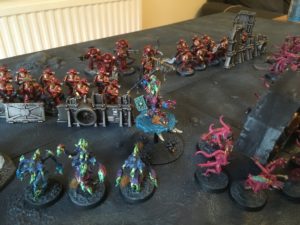 Chris’ Chaos Space Marines take cover at the start of the game, but only to encourage Tom to shoot the Daemons instead. By hanging back, they also zone out Tom’s orbiting Inceptor unit. 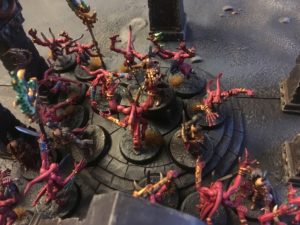 Both units of Horrors clash with the Sisters of Silence for multiple rounds of combat in the ruins. They heroically hold the centre of the board while nullifying Warp powers in a radius around them. The Sister Superior eventually falls, but not before decimating one unit of Horrors and substantially impeding the heretic assault. 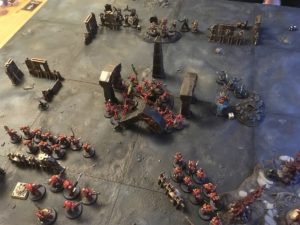 Tom’s Space Marines concentrate their fire on the Flamers and Herald on the right, eventually taking both units down right as they reach the defenders. The Primaris also succeed in wiping out one unit of Horrors. 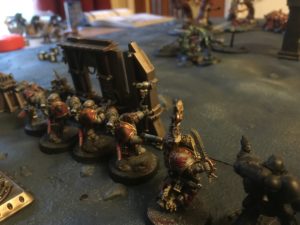 A brave Space Wolf pokes his hammer out from behind cover, ineffectively. 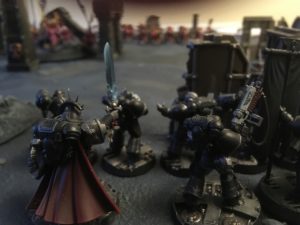 On the other side of the field, the Iron Hands Primaris Captain reveals that he owns a sword. 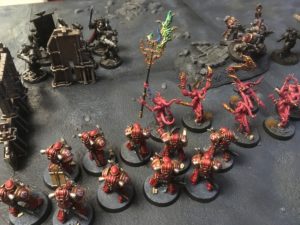 These distractions aside, Chris’ surviving Daemons reach the Imperial line. Behind them, a squad of Heretic Astartes glitch forwards through the Warp to join them, chainswords at the ready. 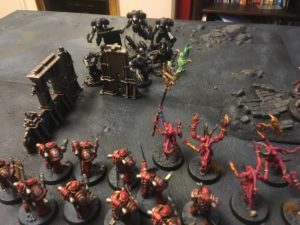 But then: from space! The Inceptors descend directly behind the Primaris line, taking advantage of targeting telemetry from the Captain and Lieutenant to unleash devastating firepower on the heretics – slaying nine and causing the rest to flee. From the right, the other Primaris Lieutenant charges the Horrors and kills all of them with his Power Sword. Their assault blunted, the remaining Chaos forces retreat.

Thanks for listening, everybody! Miniatures Monthly will return on Tuesday January 30th.