Miniatures Monthly 012: The Wonderwall of Nagash

An Miniatures posted by Chris Thursten on January 30, 2018

Tom and Chris discuss a vast amount of news across both Warhammer 40,000 and Age of Sigmar. Plus: a meditation on shame piles, speedpainting tips, colour theory, Shadespire theory, Skirmish drama and loads more.

A little more information about Malign Portents (in particular, the contents of the book) has come out since we recorded this episode. You can find out a little more here. 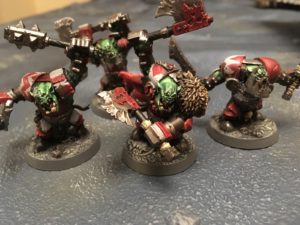 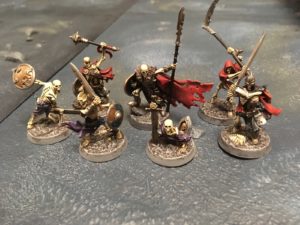 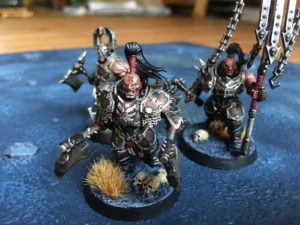 Chris’ latest batch of Blood Warriors (they’ve not had their flame effects applied yet.) 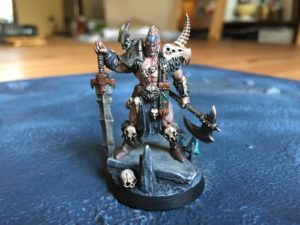 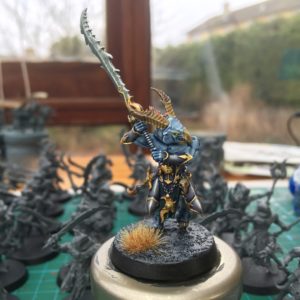 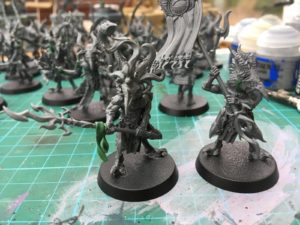 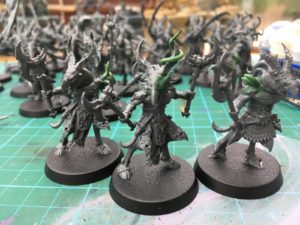 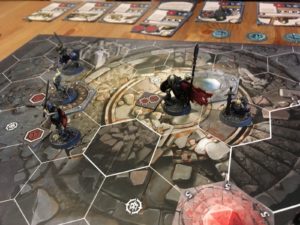 Tom’s Sepulchral Guard in a defensive position during a game of Shadespire. 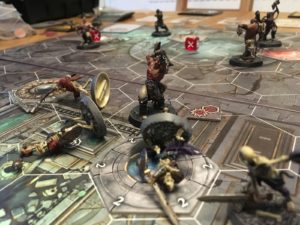 The greatest moment in Saek’s, and possibly Chris’, life. 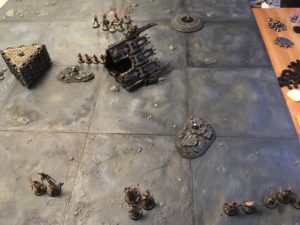 We deploy at the start of this month’s Skirmish battle. Tom’s Sylvaneth, top, must break through the Khorne line and escape off the bottom edge of the board. 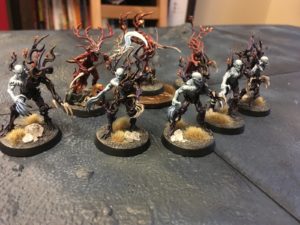 Tom creates a defensive cage using his Dryads and Spite-Revenants. The Dryad stood on a golden disk is the relic bearer, carrying the secrets that the Sylvaneth recovered from the ruins during the previous battle. 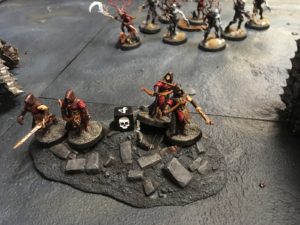 As the Sylvaneth break left, the Glade Guard take up a firing position on the dangerous ruins in the centre of the battlefield. 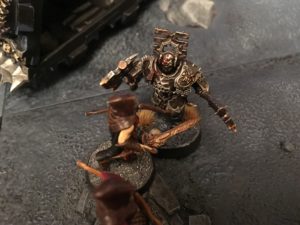 A single furious Blood Warrior makes a long charge into the Glade Guard position, but neither side can find an advantage in the initial combat. Soon, however, the fight goes the way of Khorne. Tom commits the Branchwych to the fight in the centre, but she’s ultimately slain by this one formidable warrior. 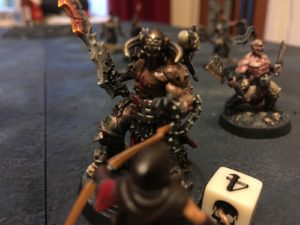 Tom’s Glade Guard spread deeper into the Khorne line to slow the Chaos advance. Despite his tremendous height advantage, the Slaughterpriest fails to do any damage. 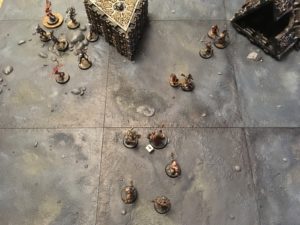 Chris’ forces clean up in the centre, although the Slaughterpriest doesn’t score any kills – and then fails a prayer, dealing three mortal wounds to himself. Tom makes a break for the edge, before realising that he can’t actually get far enough to save the relic before the game is over. 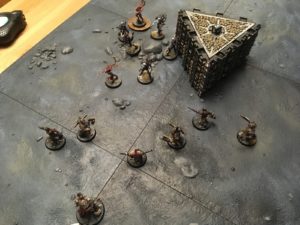 A fight brews on the edge of the battlefield, but Chris must protect his now-wounded Slaughterpriest. Knowing he can’t escape with the relic, Tom hides the carrier in order to deny Chris a Major Victory. 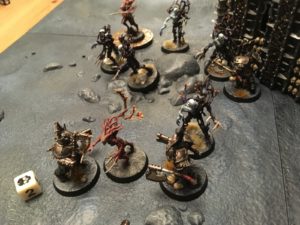 Battle erupts between the Blood Warriors and Spite-Revenants – but despite their flimsy defenses, no Revenants are slain – and in return, they kill every single Blood Warrior. 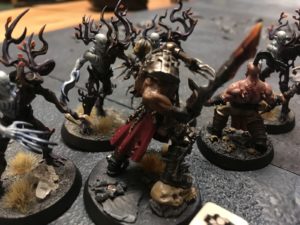 Suddenly, the pace of the battle changes. The Spite-Revenants close in on the Slaughterpriest and surviving Reavers. The Slaughterpriest does minimal damage with his attacks, and the Sylvaneth respond by slaying the Khorne warband to a man. Having faced certain defeat only two turns before, Tom wins a Major Victory!

Thanks for listening, everybody! Miniatures Monthly will return in early March.